A report out today (Tuesday) by UNISON shows that Scotland’s occupational therapists are struggling to maintain the level of service their patients need in light of budget cuts and staffing shortages.

Those surveyed in the report – Under Pressure: Scotland’s occupational therapists speak out – said they had huge concerns about the impact cuts are having on the service. An overwhelming majority (82%) reported increased workloads, 60% reported having to cope with reduced members of staff and almost half (48%) reported funding cuts.

There were recurring themes among the concerns: assessments being overruled because of resource pressures; and failure by management to replace absent colleagues, specifically for maternity leave which, given the virtually all-female composition of the workforce, is more common than in many other groups of staff. When asked if they regularly worked more than their contracted hours 60% of respondents said they did – an extra five hours a week was the average.

While the majority (58%) of respondents reported their standard of living had dropped in the last 3-4 years. Some of the views included:

• “Staffing has gone down in the last few years but the same level of service is expected. You begin to dread someone saying they are pregnant because you know you will be left really short during mat leave which is an unpleasant feeling because you want to be pleased for people’s good news.”

• “Senior managers are now scrutinising OT recommendations and refusing some, despite a qualified OT having made the clinical decision that equipment or adaptations are required to meet the client’s needs.”

• “Everything costs more but pay doesn’t match the increase. I have to be careful to only buy essentials when shopping.”

Sandra Dee Masson, an occupational therapist and vice chair of UNISON Scotland’s Health Committee, said: “Occupational therapy plays a vital role and yet isn’t taken into account when planning services and looking forward to patient care. Failing to properly utilise occupational therapists in the planning process completely undermines the effectiveness of change, there are instances where patients are discharged from hospital with inadequate OT consideration which results in readmission.

“Better investment in and coordination with occupational therapists would not only improve the patient journey, but it would improve outcomes, deliver better value for public money and improve the working lives of a dedicated group of workers who are very definitely under pressure.”

Dave Watson, UNISON’s head of bargaining and campaigns, said: “The picture that emerges from this report is one of a dedicated but frustrated workforce wanting to deliver a service but finding it increasingly difficult to do so. Pressures on budgets and changes to service delivery mean they are increasingly unable to deliver a service to the standard of which they are capable. Workforce demand is increasing while the workforce itself is diminishing. “This is played out against a backdrop of the majority of the workforce finding that their own personal circumstances are becoming more difficult as inflation and minimal or absent pay rises eat away at the value of their wages.”

Copies of the report can be found here

UNISON Scotland is urging all members to defend the union’s campaigning voice by voting ‘yes’ to keep its unique political fund. The ballot runs from 1-30 November.

Mike Kirby, UNISON Scottish secretary explains: “Like all trade unions, UNISON is required in law to have a political fund for campaigning generally and specifically to affiliate or donate to any political party.

“UNISON is unique in giving members four options - to join the General Political Fund for general campaigning, or the Affiliated Fund which is connected to the Labour Party, or contribute to both, or to opt out of the fund.

The best way to define this is to list the kind of campaigns that the union could not have mounted without a political fund.

lobbying and campaigning against outsourcing and privatisation, including the victory in Edinburgh

campaigning for fairer pay through the Worth It campaign

fighting racism and discrimination, including our successful fight against the BNP

getting legislation for more equality including through public sector equalities duties

extending coverage of the Scottish Living Wage and getting this issue up the political agenda in the Scottish Parliament and in public sector agencies and the Third Sector.

UNISON Scotland responses to consultations conducted by the Scottish Parliament are in part resourced from the Political Fund and have included:

Following a ballot of all members in 1995, UNISON uniquely decided to have a political fund with two sections. Following a ballot in Mrach 2005, 85% of those who voted said Yes to continue the fund, which will allow UNISON to continue campaigning in the political arena, including the current campaign to defend public sector pensions.

The General Political Fund (GPF) which finances political campaigns in the wider public arena. It is not affiliated to any political party - is used for general campaigning, for example the long campaign for a Scottish Parliament. A branch can access these funds when it needs to run campaigns concerning political decisions.

The Affiliated Political Fund (APF) or LabourLink finances our affiliation to the Labour Party.

Members individually choose which fund to contribute to. They can also decide to opt out of any political levy or contribute to both funds.

Great day at Monklands yesterday fellow workers, patients and visitors supporting our campaign to end the Pro£steering in NHS Lanarkshire. Over 500 names on our petitions and 200 individual letters to local politicians! SOLIDARITY AT WORK 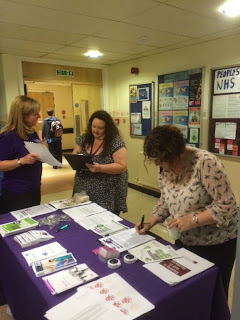 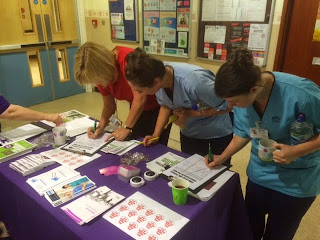 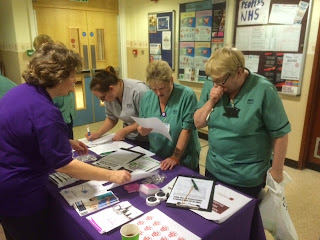 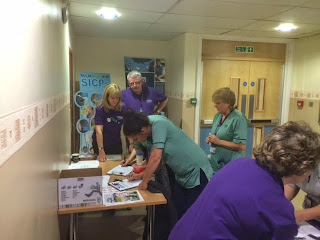 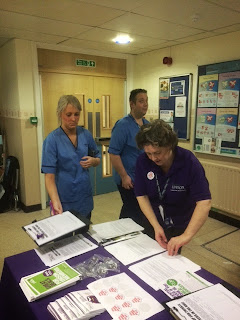 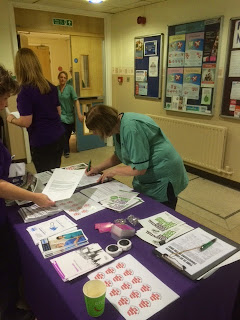 Article from this week's East Kilbride news on ISS at Hairmyres bringing in cleaner's from Coventry to help clean hospital following a Healthcare Enviroment Inspectorate visit. This despite the fact that ISS have earned extra thousands of £££'s from the taxpayer through NHS Lanarkshire. This weeks EK News article here
Posted by UNISON at 18:42

We have had a great response from the staff and general public at our two stalls in Hairmyres on Tuesday and Wishaw General today, with over 1,000 signatures collected in support of our campaign.

Thank you to everyone who has supported our campaign so far, and to those who have already committed their support to the Branch.

Keep an eye out on our Facebook page for more campaigning and perhaps a sighting of a Fat Cat! 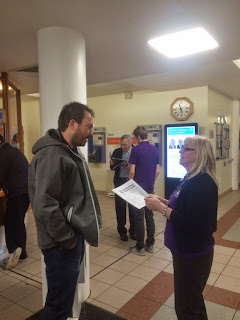 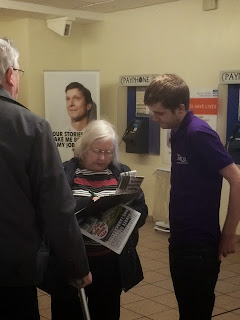 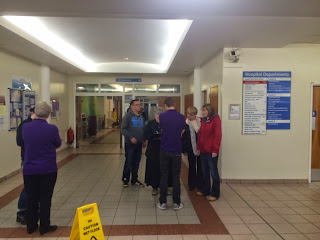 We have produced a put online a draft letter for you too use/adapt while writing to local politicians, which can be downloaded. Below you will find the same text and a link to send it to your local politicians MSPs, MPs and Councillors simply by imputing your postcode. Simples! Copy and paste the letter below and then visit this page .

I am writing as a constituent who has grave concerns surrounding the proposals of NHS Lanarkshire to extend the Soft Facilities Management (cleaning, portering, catering, and security) contracts with private contractors Serco at Wishaw General and ISS at Hairmyres Hospital.The NHS Lanarkshire Board requires to make this decision by the end of 2014.

It is my understanding that the Board intends to simply roll on the contracts with the existing Private providers, thereby continuing to pay taxpayers money to the shareholders of SERCO and ISS, for the provision of public services. UNISON and the other Health Unions and Professional Associations are campaigning to have the services brought back in house, and I as a constituent and service user support this view and would request your support to lobby the Board on this issue.

I firmly believe that staff employed in Wishaw General and Hairmyres should be employed by the NHS and not private companies who are in the NHS to bleed money from it. There is a real opportunity for NHS Lanarkshire to bring back in-house these services and ensure quality and public control of public money.

I look forward to hearing your view of this vitally important issue.

We would like to thank those friends and supporters who have already acted on this request. Please share widely and encourage others to do likewise remember PFIs bleed the NHS dry!

Click on the picture to find out how to join UNISON.

If you are already a UNISON member but dont receive any mail from us, that may mean we do not have an up-to-date address for you. You can now update your membership records on-line by clicking here and choosing the details that need to be updated.